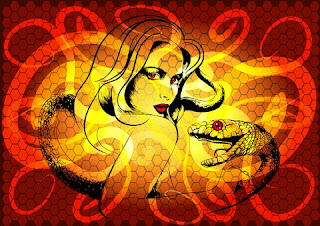 I don’t have much use for Sigmund Freud and, yes, I’m a big Carl Jung fan, but I do credit Freud for noticing my favorite word synchronicity, the Freudian Slip. That’s when your ego says what your id was thinking instead of what your  super-ego told it to say.  This is usually very embarrassing for the ego.

Here’s one of my favorite FS moments from way back:

I’m a young coed at a college mixer; there are grad students prowling around, looking for undergrads, I assume.  I meet this guy, good looking and pleasant who tells me he’s studying microbiology.   In true coed light-hearted banter I say, “Oh, you mean you study little orgasms…I mean organisms…” and then I burst out laughing.  There was just nowhere to hide.  I didn’t end up dating that guy, though we had a great conversation.

In my experience, Freudian slips are waking dreams in which the Trickster/ Shadow archetype is messing with me, and since the archetype concept belongs to Jung, I’ve renamed the phenomenon, the Freudian/Jungian Shadow Slip (FJSS) to credit him, as well.

A waking dream in Active Dreaming is when you look at an event in waking life as if it were a dream and apply the same pondering observation to a waking reality that you would to a night dream.  So, having frequently recognized my Shadow archetype in dreams; I should know Her in waking.

It’s not as easy as it sounds because: a) the ego hates looking stupid, so it usually does a lot of damage control and/or rationalization to avoid looking at any undesired truth; and b) they don’t call it the UNconscious for nothing; what’s in the dark, stays in the dark, unless you shine a light on it.

But, like night dreams, FJSS moments are opportunities to learn about myself.

As I understand Jung, an Archetype is the energy mold from which certain universal psychic realities flow into particular mythic or symbolic patterns. Cultures project consensus archetypes into myth and religion; we often project our individual archetypes into others. Dreams reveal what archetypes are ready to be integrated in the psyche, sometimes by mirroring some troubled aspect of our lives. As Joseph Campbell famously put it, “Myths are public dreams, dreams are private myths”.

For Jung, the first step on the path to Individuation, is that a person must face the Shadow. I think this is what Pogo meant when he said, “We have met the enemy and he is us.” (Individuation: that’s when your analyst gives you an A, kidding; it’s when a person has integrated all the cast off soul energies, restoring wholeness to the person and peace of mind.  I’d say it’s very like the Eastern concept of Enlightenment).

The Shadow has many manifestations; perhaps the most extreme is the archetype of evil, the devil. The Shadow represents what we reject about ourselves as unacceptable, and since it’s unacceptable to the egoic persona, we tend to unconsciously project our shadows on to others.  The devil, the enemy, the blasphemer, the person I just can’t stand, whose faults just drive me crazy, the person who is different, race, gender, nationality, the list is fairly long.

The main element of the Shadow is that it’s hidden, the ego hasn’t got a clue that it’s there; but, says Jung, in order to grow up and take responsibility for our own actions, it’s the first threshold we need to cross. We meet our Shadow in dreams, as same-sex-as-the-dreamer characters doing stuff the dreamer would consciously never do.  The otherness of the Shadow is the first clue this archetypal energy is at work.  The challenge is to see our Shadow and incorporate it’s existence into our conscious, waking life.  Since we are by definition, unconscious of the Shadow, the only way to understand those aspects of ourselves we need to face and integrate positively, is by paying attentions to dreams, and in my opinion, to FJSS.

In FJSS, the Trickster archetype is also at play alongside the Shadow. The Trickster archetype comes by its name honestly. It’s the energy in life that seems to trip you up or put you off your intended course. Trickster energy in many cultures is closely aligned with the Shadow; it’s manifestations are usually ironically funny.  Examples are the Norse God Loki, wonderfully featured in the movie, "Mask", in which Jim Carrey portrays a human who encounters the Trickster God when he finds a mask of Loki.  In other traditions, like the Afro-Cuban Lucumi, the Trickster god is Eleggua, who is also the gatekeeper and guardian of the crossroads and of all beginnings, so he is propitiated before commencing any human undertaking.

For Jung, the Shadow is the gatekeeper of the Psyche, which is Consciousness in each of us. With the Trickster, how you respond makes the difference between learning the wisdom offered you by the unconscious or losing the gift in ego fueled befuddlement.

So in my coed FJSS, what’s behind this slip is a towering Feminine Shadow Archetype; the Prostitute, the “easy woman.”  Interestingly, I just met a new embodiment of her for the first time, Pompa Gyra, the Lady in Red; a Brazilian friend introduced her to me. Recognizing this archetype’s pent up energy and giving her some elbowroom in my personality can help me avoid a lot of silliness and personal repression. In patriarchal cultures, the Feminine Sexual Archetype, personified throughout millennia in many mythic goddess forms, is driven underground.  Woman is split into Virgin/Whore and to various degrees, in various cultures, controlled by that myth.  But the energy of an archetype only doubles when it’s repressed; it needs it’s proper place in the psyche, culturally or personally.

Lucky for me, I live in a country and at a time when that wounded Feminine Archetype is less hidden and beginning to heal. There’s still a lot of cultural skewing of the Feminine, but personally, more women are looking within for who and how they want to be.  I have a wonderful Pompa Gira Shadow from my dream adventures that I’ve written about earlier; her name is Jeze-bella.

As I make friends with the Jeze-bella in me, I learn to be more critical of the social mores and standards I allow to be knee-jerk truths for how I live my life. With Jeze-bella’s help, I sift through the good girl/bad girl indoctrination and come up with ideas that fit and attitudes that feel right.

So, let’s hear it for the Shadow, the dark side of our personality moon.  Let’s find a way to befriend our own darkness so we transcend the pettiness of projection.  The Shadow is a formidable Archetype until it is integrated; then it is the wisest of teachers.  My dreams have taught me that there is so much to learn that can’t come from books and universities, scholars or authorities.  Many spiritual teachers will tell you that you are born knowing all that you need to know; however, the process of remembering what you need to know after family and culture gets through with you can be a huge challenge.

Every time you put your ear to the pillow, listen.  If what you hear constantly scares you, get help; otherwise, listen, record, and come to know your dreaming experience and the dream self that lives it every night.  We are on the cusp of a major paradigm shift; the next generations will value their dreaming, both in sleep and waking. Each of us who takes to this path today adds weight to this tipping point we’re living.

From Robert Moss's wonderful new collection of poetry: "Here, Everything is Dreaming."

Go out in the garden any night,
step one inch outside the tame land
and you are near what you seek.
Open the window of your soul
any night and your guide may come in.
The issue is whether you'll run away
when you see what it is.  To make sure
you succeed, tether yourself like a goat
at the edge of the tiger wood that breathes
right beside your bed.  He'll come.