The Observer or the Observed? 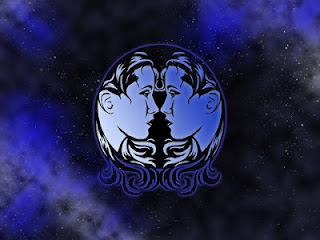 In a previous post, I shared with you my wonderful clear light dream experience, but for any just tuning in, it was a two installment dream from Oct and Dec of 2001. In October I woke up to an announcer man's voice saying; "Can the ego be dissolved; what is the role of the observer?" Then in Dec, I came back from a dream where I had known total unity with a magnificent loving light source, where I retained some sense of myself, but definitely not an ego sense. I woke up thinking, I'll never be able to explain this to anyone, not even to myself.

These two little dream experiences are on my all time hit parade. I can readily recall the blissful experience of pure being. I know people meditate years to achieve such an experience and it was given to me, who only went to sleep anticipating whatever the dream source wanted to hand out this time. I don't doubt that as J. Ziewe, author of the wonderful book on out of body experiences, Multi-Dimensional Man claims, a regular meditation practice can lead to even greater OBE and dream experiences. But amazing experiences also come through ordinary, spontaneous sleep dreams.

When I remembered these dreams while walking on the beach this Spring, I realized how lost in my head I was at that moment; so I let my ego become the Observer, seeing the breathtaking beauty before me, being present in it with all my senses. What a difference! I know that this parallels the Buddhist teaching of mindfulness, this presence in the moment; but the koan that taught me this lesson is a dream.

In the DVD program, The Way of the Dreamer with Robert Moss, Robert recounts a belief held by the Yoruba peoples of West Africa that we all have a double in heaven who watches over us. This other, higher self watches our earth life and counsels us, primarily in dreams. We may even switch roles, observer and observed, from lifetime to lifetime.

I've had a few dream visits from a twin self, one in which she's encouraging me to pursue my passion for dreams. She looks just like me, though usually her hair is different; I definitely experience her as other.

The Observer or the Observed?  It feels like the difference between coming from a spiritual center, what Jung would call the Self, and coming from the ego, the little I, given to childish, not childlike, thinking.

My dreams teach me to be present; I learn things in dreams that prove life enhancing and healing in my waking life. I've always enjoyed dreaming of my double, although it's a rare treat. Thank goodness I've kept journals to help me revisit her. Is she my guardian angel? Judging from her track record in my dreams, something like that.

I don't think people have to run off and become Jungian scholars to appreciate a dream life and a dream practice; I think paying attention and honoring dreams is child's play, so we can all do it.

May all our best dreams come true. May we all listen to our higher counsel, open our hearts and act with the confidence that we're not alone; we have allies and sources of inner strength, not only in dreams, but certainly available there.
Posted by Adelita Chirino at 8:49 AM 1 comment: 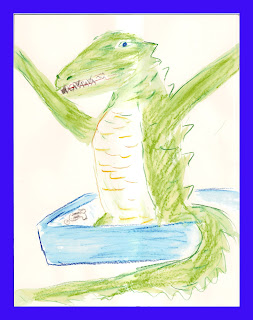 Today is Good Friday; Christians all over the world commemorate the sacrifice Jesus made on their behalf, a sacrifice rooted in extreme LOVE.

For me, today is also Crocodile Friday. Let me tell you why.

When I was a little girl, around 5 years old, living in Havana with my mom, dad, big brother and collie, I had my first Big Dream. It was Good Friday and in those pre- revolution times, Good Friday was a religious holiday observed by all business, media and people. I didn't grow up in a religious household, just a loving one. As usual in those halcyon days, I got up and had the whole day to play on my swings, draw or find some other enchanted occupation for myself.

Graciela, the wonderful Afro-Cuban woman who came to help my mom, was in the kitchen chopping carrots. I ran in to say hi and she was uncharacteristically curt with me. In a firm voice she said; "No nina, vete, que tengo este cuchillo y el diablo esta suerto hoy, y alomejor te corto sinquerer." Meaning, "No little one, get out; I have this knife and the devil is loose and I might cut you accidentally." Needless to say, I made a bee line for my swing set in the front yard. But then, I was afraid to swing, just in case, so I sat and thought about what Graciela had said.

I might have forgotten all about it after a while because next thing I know, it was bed time and I'm kissing my mom and dad goodnight; they were watching a Passion Play, which was the only thing being televised. In the middle of the night I woke up from a big ass nightmare, crying.

Spring ahead 13 or so years later and I'm a Freshman English major in college. Reading Joseph Frank's, Literature of the Bible, I come across a footnote on the creature Leviathan in the Book of Job. To paraphrase (as I no longer have the book handy) he says that Leviathan is often depicted as a humongous crocodile and identified with Satan. I hadn't remembered my crocodile dream until that moment when it came slamming into my consciousness like the huge dream train slams into the station in the movie, Hugo. I sat there and marveled; how could a five year old child know this? As a Freshman, I hadn't read Carl Jung's work on the collective unconscious, but my deep curiosity about dreams and the nature of dreaming began that day.

In Jung's view, and this is something that contributed to his rejection of Freud's dream theories, the unconscious is not just a repository for suppressed, uncivilized and aggressive impulses. (No wonder people don't want to look into that velvet dark.) To Jung, the unconscious is a vast inner space, (to borrow a phrase from the brilliant Sci-fi author, Ursula LeGuin), a space that offers both creativity and healing and is accessed in dreams. Part of that space is the collective unconscious, the source of all that binds humanity as one, home to the Archetypes of human kind.

I've since learned that Cuba is thought to resemble a semi-submerged crocodile, because the island is shaped like one and that there is a species of crocodile, one of only four in the new world, that's found primarily in Cuba and is called the Cuban Crocodile. It's known for leaping straight up from the water in order to catch prey mid air. I didn't know this till just recently; imagine!

My Crocodile visitation is an ongoing source of fascination to me. Since I discovered this particular animal archetype in my childhood bathtub, I've come to see many aspects of the image. Today, She is the Babylonian Queen of the Ocean, Tiamat, the primordial dragon, and She is fearsome. She is Howling Mary, the slain Feminine archetype who came to me in my Howling Mary dream, biding her time, letting her presence be known. http://litadreaming.blogspot.com/2011/08/howling-mary.html And, haven't you ever seen those wonderful little front yard shrines to Mary in an upended bathtub? Yes, it's Mary in that bathtub, too.

This is the power of dreaming. This is how Big Dreams often come, as childhood or early nightmares. Perhaps, with apologies, the dream source impacts us with nightmares and hopes we've got the good sense to explore the message further.

I don't want to skip over the role of Devil in my early totem dream. Certainly, I would never romanticize or cutesy up the crocodile; never do I want to come face to face with one in waking life, (unlike my elephant totem which I've met on both sides).

I hold that the devil is the invention of patriarchal religions, as is dualistic thinking and the hierarchical paradigm. Goddess inclusive religions tend to see things cyclically: birth, life, death, birth again, mirrored in the seasons of earth. Death isn't evil, it's part of life. We're all capable of good and evil. The Devil is part of a dichotomy that projects evil as one Absolute, the opposite of Good, God. As Jung taught, it's dangerous to project our own dark shadow on to others and as Jesus taught, don't look for the mote in your neighbor's eye unless you remove the plank from your own.

But tomes like the 15th century classic, The Malleus Maleficarum or The Hammer of Witches, written by two Dominican monks as a guide for Inquisitors, are monuments to blind projection and provide ample evidence of the malice, cruelty and misogyny of the medieval Christian Church. In those illustrious times of male bullying, women were leagued with the devil, at least any woman who showed the least bit of spine and independence, owned property that could be taken from her, or just knew too much.

If Woman is maligned by being linked with the devil, the serpent and the apple, the fall from grace, the first one to sin, then no wonder Mary is pissed off and there's a crocodile waiting for me in the bath tub; waiting to talk to me, to teach me.

On Crocodile Friday, I honor the Great Mother and I honor Jesus, her beloved Son. I honor Spring and I honor Dreams. Blessed Be.
Posted by Adelita Chirino at 7:52 AM 6 comments: