The Strange Case of Me and Not Me 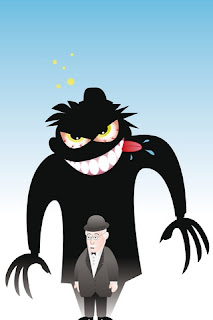 I’ve loved public libraries since I was 15 when I worked in one after school; recently, I've taken to frequenting my neighborhood library again. I’ve especially enjoyed access to a great selection of literature on audio CD. I can listen to wonderful stories while I’m making jewelry, driving or cooking. Sometimes I listen to contemporary works, other times I select a classic. Often, I'm delighted by the energizing synchronicity of finding myself listening to the exact inspiration I need at the time.

I just finished Robert Louis Stevenson's classic, "The Strange Case of Dr. Jekyll and Mr. Hyde", wonderfully narrated by Scott Brick. I was mesmerized by the story of a brilliant man who experiments with splitting himself from his Shadow and consequently reaps the tragic results. Stevenson wrote the story prior to any publication of Jung's famous work on the Shadow and what's even better, the story was based on his dreams.

In a recent post from Robert Moss's Dreamgates blog, Robert includes these great quotes about the story from Stevenson and from his wife.

'“For two days I went about racking my brains for a plot of any sort; and on the second night I dreamed the scene at the window, and a scene afterward split in two, in which Hyde, pursued for some crime, took the powder and underwent the change in the presence of his pursuers.”

You can read the rest of Robert's post here:

Stevenson entertained a vibrant dialogue with his dreams and believed his very livelihood depended on it. An active dream dialogue is key to unlocking many of life's essential mysteries, not the least of which is how to achieve balance within our imperfect humanity.

According to Carl Jung, the characters we reject or that repulse us in our dreams, especially when they are the same gender as us, are our Shadow parts. These are the aspects of our personalities that we don’t want to own, aspects that we deem undesirable or socially unacceptable. Sometimes, we also reject our "bright Shadow," admirable characteristics or qualities which our low self-esteem won't let us claim as our own.

The thing about the Shadow Archetype is that in waking life, we often project on to others what we reject and fear in ourselves. When we're hyper-critical and condemning of others, we may be animated by our unconscious Shadow blindness. But when we're actively in dialogue with our dreams, we have an opportunity to interact with Shadow aspects of our personality in ultimately rewarding ways.

Case in point is my Jeze-bella, whom I've renamed after getting to know her a bit.  When she appeared in my dream, I saw her as opposite to me, the Whore to my Madonna. But it was that gut feeling of rejection that led me to seek more interaction with her in a dream re-entry. When I met her in my night dream I was indifferent to her; I was willing to let her take my risks and suffer my dangers without so much as a thought for her well-being. Then I re-entered my dream and really met her, talked to her and came to understand her life strategy. Maybe she's down and dirty, but she’s a survivor, with a survivor’s stealth and wile. I’m learning a lot from her. Now, I love getting together with her for continued extended adventures in the in-between spaces of dream re-entry.

Dreams teach us introspection. They put us in dialogue with dimensions of ourselves that we've unconsciously rejected but that our dreams show us we must consciously integrate. Jung believed that the Shadow Archetype is critically important to our personal development and saw it as the first gateway to individuation. He also posited that integrating aspects of our Shadow selves is the secret to unlocking our true creativity. Creativity is the goddess/god given faculty of living life with imagination, a sense of humor and an accurate compass to where our bliss lies.

Each time I react negatively to a dream, especially to a female character, each time dreams leave me with feelings that are icky, scary or embarrassing, my dream radar says, “Darling, do you think this may have some valuable teaching from your Shadow?” Owning the "not me" parts of myself allows me to navigate my waking life more consciously and responsibly, with fewer blind spots to trip me up.

Now, what do you think Michele Bachmann or Rick Perry would say about their inner Jezebels or Mr. Hydes? In the same sense that we project our evil and taboos on to others individually, we collude with other one-dimensional personalities and project as a group on to other groups all our denied short-comings, fear and doubt. This was characteristic of the Nazi fervor in WWII, absolute Black and White; we’re Good, God is on our side; they’re Evil, Satan on earth. If you think this is a past phenomenon, just look at what, besides money-greed, is fueling our scary world conflicts today.

Instead of buying our own ego hype and living in a rigid Persona, we come to realize through dream-play that we’re capable of many personalities, some good, some bad (in our own judgments anyway), some we see as "me" and some we insist are "not me". Establishing a dialogue and living consciously with our rejected parts guards us from the lure of polemic ideologies; we become rooted in our own spirituality. Without this insight, we sit in judgment of people whom we believe are opposite to us; we list the faults of others and criticize their choices. But when we have experience meeting and dialoguing with our own Shadow through dreaming, we recognize the complexity of the other person's existence, and though we may still not agree with them, we don't need to villanize or exterminate them.

I think that the more of us get chummy with our personal Shadows, the more of us will recognize the Shadows looming behind the ideologues that seek to rule us. We can point and say, “I’d like you to turn around and answer to that Shadow behind you, and when you’ve found your humility and compassion, you can speak to me of your god, your right and wrong, and your vision for our country.
Posted by Adelita Chirino at 9:13 AM