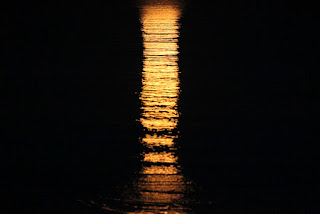 On a friend's recommendation, Jim picked up The Hunger Games for his train commute the other day, finished it in a flash and suggested I give it a try.  Now, we've both finished all three books in the series and really liked them, mostly.

(Spoiler alert: I’ll be careful to divulge as little of the plot as possible, in case you haven’t read the books and want to, but there will be a wee bit of revealing commentary I can’t help.)

Riding in the car with Jim yesterday, we started talking about the ending in the third book, Mockingjay, how it feels rushed and truncated to both of us.  In Jim’s words, it lacks a real denouement.

We suppose the author could have been under pressure to deliver the copy or in a hurry to wrap up the story, but I want to know how hope, trust and love were reborn from the ashes of Katniss and Peeta’s shattered lives. How did they get from trauma, horror and loss to a life together in what’s left of district 12?

For me, Peeta is the most spiritual character in the story; he reminds me of the Fool in the Tarot deck, loving, trusting and joyful.  He’s capable of complete self-sacrifice in the name of love; yet, in the end, after going through hell and back, his story is summarized in a matter of a few paragraphs spoken by Katniss in her closing narrative.

The same goes for Katniss; so many wounds and so much fire in her soul, and her journey back to relative sanity is hardly described at all. Yes, she relays how she grieved for one person she lost, but did Peeta’s love once again restore her?  Isn’t this worth some of the descriptive artistry the author devotes to earlier parts of their relationship, like say, in book one?

True there was nothing left to blow up or kill by the time Katniss is narrating the end of the story, but how did they arrive at the point where they could have a life together?  It’s a story of healing and restoration; was it love that gave them back a life? Did one rescue the other from the brink, only to be rescued as well in the process?  This part of the story is worth many more pages, not just a short paragraph or two.  I don’t know why it ends so abruptly, but I’m sure Suzanne Collins could do a great job of fleshing it out.  Well, there’s still the movie script to the third book…

I admit I have a problem with “the future is bleak” story lines like this one.  Big Brother always watches; there’s always lots of cruelty, violence and loss.  I know there are many examples of this scenario in history and in some parts of the contemporary world, but is this the only future we can imagine winning out, becoming the outcome of our present age?  While we can dream, is this the best we can do?

If these are the fictions that entertain us, I think at some level it sets us up to anticipate this future; our sights/sites are set, both our vision and its scope, on the joyless, the dismal, the dire, the horror and the tragic in life.  It pumps us full of survival adrenalin, but it gives us nothing to hope for.  I remember leaving the theater after seeing Clockwork Orange many years ago, and asking; Where’s the Love? Who in this story embodied that human potential?


I don’t see Suzanne Collin’s trilogy as devoid of human caring; in fact, I think love is constantly displayed between various characters.  The power of Love to transcend incredible odds is often woven into the story, but in the end, that’s exactly what’s left out, zip, zap, done.

In the last book, Peeta, who suffers severe PTS and paranoia as a result of being tortured, devises a way to test for trustworthiness in those around him. He recounts a memory and asks, “Real or Not Real?”  His question elicits wonderful heartfelt responses from those trying to help him.  I think it’s a good question to ask.

The Hunger Games Trilogy: Real or Not Real?

The love between the characters: Real or Not Real?

Love heals: Real or Not Real?

Love is the answer: Real or Not Real?

We can dream a future story that doesn’t involve total catastrophe, loss and destruction: Real or Not Real?

Dreams are Real: Real or Not Real?  You know my answer to that one.

Posted by Adelita Chirino at 5:18 AM 6 comments: 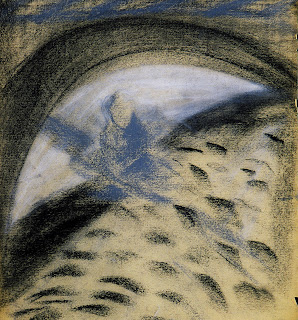 Okay, I'm talking about the size of a dream here.

I often hear people say;   "... all I could remember was just an image, or a word, or just like one quick scene.  I can't remember my dreams."

In my experience, dream fragments like these are rich playgrounds for further exploration and never to be underestimated.  Here's a fun example I discovered today while playing Bibliomancy with my dream journals; a snippet of a dream from 27 years ago, dated on my birthday, so technically it was my birthday dream for that year.

My old woman is coming to get me, to guide me.  She tells me two things...

That's it.  That's the dream memory.  Of course, I'd like to know what she said in the dream, but I didn't bring that back. All I've got is this enigmatic fragment.  What a goldmine!

The Old Woman archetype, the Crone of the Tarot Deck, is not the worthless or ugly or unnecessary cultural archetype that exists today.  As in ancient times, the Crone is the Wise Woman and the Healer.  She is also the Midwife of Death, as in the Yoruban/Lucumi goddess Oya or the Hindu Kali. She is the High Priestess of the Great Mother.

I know this wise woman from other dream visits.  I know her by the name she gave me to call her.  I've heard her speak to me before.   Having her on my side is a big blessing.  This picture is one I drew of her after another dream visit about 3 years prior to the fragment I recorded.

What two things did she say?  How about...

You're not going to remember much of this visit.
I'm with you always.

How's that for a possibility? I just used my imagination.

As a dream practitioner, I wrote a dream fragment down to honor a visit with the Wise Woman and say thank you to my dream source. I didn't return to this dream fragment until now, 27 years later, and I rediscover a powerful dream ally I hadn't remembered in a while.  And coincidentally, my birthday was this past weekend.

All dream time is NOW; I'll definitely re-enter this dream and talk to her soon.

My point is that, if there are times in life when size does matter, the size of a dream never does.  Dream power comes in the most insignificant of packages.  All we have to do is pay attention.  Pay attention and keep a record for future perusal.  That's the fun of dream play.
Posted by Adelita Chirino at 9:10 AM 2 comments: