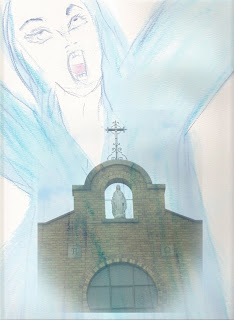 I’m excited to tell you my Howling Mary dream from May, I think, 1971. It was the end of my Senior year at University of Rochester. I only wished that at that time I was recording my dreams in journals. I didn’t really start till 1976 with another BIG DREAM.

What’s a BIG DREAM? Oh, it’s like the diving horn on a submarine or like the in your face divine apparition.

Howling Mary was the middle dream of what I call a triptych dream - three dreams in a row that transition from one setting, etc to the next – tied together by the fact that they all happen in succession.

I don’t remember the first and have vague image recollections of the third, but even though I didn’t write and draw HM till 1982, eleven years after the dream, she was as vivid then as she is to me now. ‘

The telling of this dream and the image I created for your pleasure of it are both the contemporary versions.

I’m inside the small Catholic church I knew as a teenager in Endicott, N.Y., “Our Lady of Good Counsel” (The picture above of the statue outside this little church was taken on a family visit back a couple of years ago.)

I walk in and instead of going up the center aisle towards the altar, I turn and go up the left side aisle, by the stained glass windows and the Stations of the Cross. Mass is in process. I’m probably the 21-year-old self I am while I’m dreaming this, dressed as I would be usually, entering the church by some compulsion.

I take to the left side, drawn by an overwhelming pull, something calling to me inside my heart. Ignoring the worshipers following their lines, I quietly make my way up to the statue of Mary that is to the left of the altar, if you’re facing that direction.

She is Mother Mary of Mercy who in her compassion steps on the head of the snake so we don’t have to worry about it so much anymore.

As I approach her, the statue animates, like in Fantasia; she looms 10 times her size above me and howls. I rush to the foot of her howling form and place my hand at her feet and bow my head in reverence and awe. I know she is howling from outrage and pain, I just don’t know what that outrage and pain is.

However, when I look to my right, the priest has finished consecrating the Host and is about to commence the giving of communion to the congregation. I know I must intervene. I rush to where he is poised in front of the first communicant and snatch the chalice from his hand.

Looking in, I’m horrified to see that there are worms in the chalice, but as I take one out it becomes a rubber band, which I hand to each person to take away with them.

My dream ends. After the third dream I wake up in my room at college and marvel at the images and complexity of the dreams. It was Howling Mary, though, that I remember in detail, the way you do with a Big Dream.

I’ve had lots of time to see this dream manifest.

First, I was on my way to graduate school in English Literature and had no idea I’d end up so involved in the Women’s Ordination Movement of the Roman Catholic Church in the mid 70’s and 80’s that I pursued my Masters in Scriptural Studies and Pastoral Counseling from Colgate Rochester Divinity School instead.

And I certainly didn’t anticipate discovering that my beloved patriarchal Christian paradigm had such serious flaws that it really wasn’t worth bolstering with my efforts. Especially when Mary shape-shifted thanks to Erich Neumann’s “The Great Mother”, Mary Daly’s “Beyond God the Father” and Merlin Stone’s “When God Was a Woman” to name but a few meme-blowing master works.

Who knew? Apparently, Howling Mary did.

I was only 21 when that dream created a Divine Theater for me of things to come. As a great Mother archetype, I can’t imagine any finer. She is pissed off; she is aching. She howls like a wolf calling the troops that will hear her, come to her and run with her. In the last two years, I've had many wolf dream visits; She’s back. Howling for justice; howling for compassion and for innovative, loving and creative ways to fix this mess, She is my direct connection to the Divine. She can be Mother Mary, Kwan Yin, Isis, Demeter or so many of the Mother Archetype manifestations that have graced our humanity since the beginning of time.

It occurs to me that the job of a rubber band is to hold something together by first stretching to contain it. It stretches and contracts according to the need. What a beautiful symbol for the life-giving sacrament of communion. Expanding to nourish us and give us what we need to hold it together and continue to grow until we finally get it and Mary doesn’t have to feel so frustrated any more.

Latinas always have their patron Mary. Mexicans love Guadalupe and La Caridad del Cobre is the beautiful Ochun of Cuba. My Mary is Howling Mary. I don’t need to keep her to myself, but she is the Archetype who first announced to me a mission She hopes I’ll lend a hand in while on the planet. Don’t know if I’ve done much yet; but, as long as there is breath in my body, I will honor her and do what I think she wants me to do.


Posted by Adelita Chirino at 5:28 PM