The Bulldog and His Patriarchy 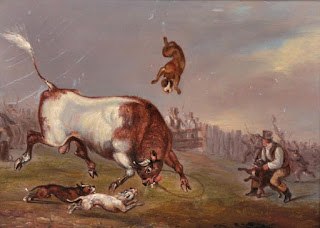 I mentioned in my previous post what fun dream archeology can be; I'm still on the trail of the bulldog.  Here's an interesting bit I found in Wikipedia:


Bulldogs have a longstanding association with
English culture, as the BBC wrote: "to many the Bulldog is a national icon, symbolizing pluck and determination."[6] During World War II, Bulldogs were often likened to Prime Minister Winston Churchill and his defiance of Nazi Germany.[7] When the English settled in the Americas, their Bulldogs came with them.

Interesting, it's definitely an English breed, but when I re-enter and check these ideas out with the bulldog in my dream, he wants me to explore further.  With a further search, I found that the reason they're called bulldogs is because back in the male fraternity of Medieval and Renaissance England, this hapless dog was bred for the sole (souless) purpose of watching it gore or be gored by a bull who was maddened beforehand by pepper blown up it's nose. It was the male sport of the day.

I digress here, but it reminds me of the story going around in my neck of the woods about people, some say the very coaches on the team, of an upscale township that shall remain nameless, (although it made the GoodWeek/BadWeek section of this week's Week Magazine), confronted with the cold reality that their kid's playing field was too wet to allow the scheduled games to commence, made the bold and mystifying decision to soak the field in gasoline and set it on fire so as to dry the field and allow the games to go on.

What planet are these people from?  How did 20 adults come to a decision so misguided and ill-advised? Yes, the field was destroyed, just for starters.  My neighbor and I were talking; he's well versed in school sports cultures, having followed his daughters teams as they grew up. We shake our heads and ask each other, how was this the decision of so many adults?

Do you see where I'm going with this?  How was bull baiting and bear baiting the decision of so many, so called, Christian adults?

It's patriarchy.  The bulldog was bred as a symbol and a sacrifice to patriarchal insanity.  We treat patriarchy as if it's the only option we have for organizing a culture, when it's not.  Patriarchy isn't all of human history; it's a small distorted fraction. Homo sapiens (a rather ironic label for humanity as we know it, coined by an 18th century Swiss botanist) has been around for hundreds of thousands of years; "Thanks to the work of exceptional scholars like archeologist Marija Gimbutas, we know that: “The Goddess is the most potent and persistent feature in the archeological records of the ancient world, a symbol of the unity of life in nature and the personification of all that was sacred and mysterious on earth.”

Patriarchy is only some 6,000 years old! It's dualistic, focused on differences and competition; whoever pisses the farthest sets the rules for right and wrong, and uses all manner of cruelty, violence and inhumanity to enforce them.

How can such cruelty to animals be allowed? Well, it was a sanctioned male sport until one of the first laws against cruelty to animals was passed in the mid 19th century. In patriarchy, male sports help develop the future generation of soldiers and keep the win/lose, either or mentality sharp for when war is declared.

One of the characteristics of my dream bulldog is that he would occasionally roll his eyes, which made him look insane; then he'd resume a direct look and return to his doggie nature.  His crazy eye roll got me to pondering about the insanity of the bulldog as mascot for the patriarchal story.


We've learned little about pre-patriarchal cultures in our history classes because history is the story the conqueror writes. In the last century, many vistas have been opened and explored.  Women have done their own scholarship and found that the male establishment's explanation of ancient artifacts and cultures has been tainted with patriarchal projection on to the ancient past, mansplaining cultures who were nothing like patriarchy in structure and function. "Goddess worshiping cultures weren’t necessarily matriarchal, they were, as Riane Eisler brilliantly presents in The Chalice and the Blade, cooperative societies."

Ancient cultures existed that were perhaps far in advance of our own on many levels, like in using what we now call psi skills.  This internal authority of the hoi polloi was frowned upon during the brutal RC Inquisition, so we've come to be raised knowing little, discounting or sometimes fearing our dreaming.

The patriarchal paradigms reign with fear, exist in hierarchies of human worth, denigrate half the human race with misogynist rules and thinking, can only think in good/bad dualism and project their own self important image, an anthropomorphized male deity who hates women for their lack of obedience and submission, on to the Male Only Divine.

Ancient cultures weren't patriarchal.  Whatever they were before patriarchy took over with the sword, they were very interesting people, our ancestors.  And beyond a doubt, women were respected and the Goddess was revered for the gifts She gives humanity.  Goddess paradigms don't need the idea of duality, they practice the idea of the dance of life, where each person, male or female, does their best, according to what they desire to do.

But I digress, yet again. As an animus figure, Jung would have a field day with my bulldog in this dream; that's what I'm doing, too.  Just like there's a wounded Feminine Divine archetype in the patriarchal paradigm, one that Jung acknowledged, there's a wounded Male Divine archetype, too.  Actually, and fittingly so, today is the day of the international celebration of that wounding, Good Friday.

Patriarchal gods are constantly demanding sacrifice; ask Isaac how he felt about his dad's religious beliefs that almost got him killed.  Patriarchal theology is the psychic arm for the hostile takeover of  ancient spiritualities that payed great tribute to the Feminine Divine. It's easy to see how patriarchy claimed as their super power, the power to deal death.

The Goddess is the direct giver of life.  Goddess cultures saw death as part of the cycle of a soul's journey, not an end but a new beginning. Many ancient burial sites suggest that care was taken at the body's burial to provide the soul the wherewithal to travel on. But Fear of Death is the supreme ultimate bogart in our cultural patriarchal closet; there are so many ways to mess up and the patriarchal god that rules on one's eternal continuance is demanding and hard to please.

So perhaps, as we all resurrect our way back home naturally, and quite organically, we can see in Jesus' sacrifice, not a necessary adherence to his father's terms of forgiveness for the human race, but a willing warrior for Love, who dared all by defying the strict patriarchal religion into which he was born, and paid the ultimate price to be a truly non-patriarchal man and a model for healing the wounded Male architype, the wounded Animus.

For me, this is the day that launched my fascination with dreams, synchronicity and imagination; I call it Crocodile Friday.

Posted by Adelita Chirino at 12:09 PM