Religious Terrorism: It's Time for Change 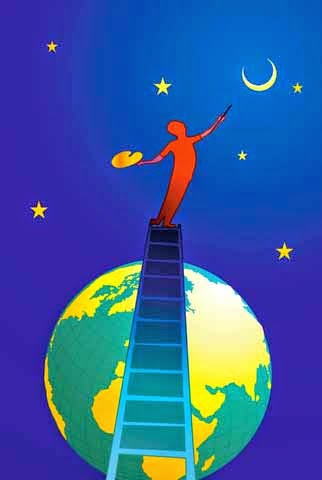 Religious terrorism is the worst aspect of the six millennia reign of patriarchy we’ve endured on this good earth.  A ferociously violent and anally righteous invisible patriarch sits atop an invisible throne in an invisible kingdom and dictates all that should happen here on earth.  His self appointed representatives command his docile minions and are justified in anything they do in His Name.  Religions are constantly fighting for more control of secular government; that was one of the prime motivators of Church and State separation for our “founding fathers.”  Theocracies are repressive and dangerous; recall the Christian Inquisition of the Middle Ages and Early Renaissance.

As last week's tragedy in Paris underscores, we live in a world where this energy has intensified, grown more dangerous and more prevalent than it has been for a while.  But there’s no difference between the atrocities committed in the name of one religion that claims absolute truth and power and another.  The worlds big three patriarchal religions, Islam, Judaism and Christianity are like a three-headed dog tearing global civilization to pieces.  There are also, as Eckhart Tolle has pointed out, secular religions like the Communist State; just as bloody, just as macho just as destructive of the spirit.

I'm tired of it.  Men running around screaming at each other about their gods and their demons and then resorting to the bloodiest means possible to prove their way is right, to carry out their Big Bad God’s will.  I say “men” because, despite the existence of women in the flock of each religion, they're to more or less degrees barred from decision-making power. The more radical and the more extremist the positions in any of the big three father run religions, the worst the position a woman is in if she’s born into the culture.  She’ll have fewer independent rights, many social and legal constrictions and increased danger of victimization, physical or psychological.  I don’t think I have to belabor the point that having to live a life determined for me by fathers, brothers and husbands would greatly suck.  There are wonderful men in these misogynist systems, of course;  in my life, I’ve been blessed in all three categories.  This, however, compares to the fact that there are wonderful white people in a racist society; the paradigm is still skewed in favor of being white, or in patriarchy, of being male.

In my estimation, spiritual transformation that leads to freedom from religious tyranny is a key avenue for bringing about the changes the world needs.  As outside, so within; if we’re captive to toxic psychic belief systems that fill us with self-loathing, anger and hate, then we can’t change how that psychic reality imprints the world around us.  Beliefs like: we’re born unworthy and full of “original” sin, we are perpetual sinners, god was so mad only the death of his one-of-a-kind son could make him relent his peeve, god hates women and gay people, god will get you if you don’t do what his appointed perps, er, priests and prophets, tell you to do, god hates pleasure…etc.,etc, etc.

While some haven’t noticed, there have been rich sea changes in the psychic paradigms of our time. They remain somewhat marginal, but the strength of revelations presented in the words of so many wonderful contemporary spiritual teachers today is fueling the energy of transformation to what I hope will be the tipping point in my lifetime.

For one, Feminism, often seen as a political movement, was critical to cracking the stained glass ceiling of patriarchal religions.  Thanks to "beyond god the father", the return of feminine divinity, the return to earth centered, mother respecting spiritual practices that our ancestors created in the beginning, will go some way to defusing the time bomb that arrogant male theocracies are perpetuating for our planet with their self-fulfilling apocalyptic prophecies. Not long ago, while accepting a European award that was also bestowed simultaneously on two women, the Dali Lama quipped that Western women will save the world.  Why?  Because besides the usual gifts women have to offer, we have the freedom to develop and exercise our influence in our cultures, and hopefully, beyond them.  Despite ignorance and entrenched machismo in our religions, we have the freedom to exert a greater influence on changing those paradigms. I agree with the DL;  women, men and children who focus on our worlds' problems with their hearts; who know themselves to be spiritual beings having a temporary physical experience and thus keep in touch with their eternal spiritual lives by interacting with their dreaming, can heal this planet.

More challenges to our narrow and literal patriarchal paradigms about who we are and the nature of reality are coming from many of the “sciences” like Quantum Physics, Integrative Medicine and Psychiatry.  And, of course, there’s spiritual teachers like Eckhart Tolle putting our egoic insanity into straightforward, non-dogmatic perspective.  So the good news is that we’re living a transformation at this moment.  At the same time that we’re experiencing the urgent need created by outer collective insanities, we’re awakening to our individual organic spiritual existence in ways that exclude the need for religious structures that bind us to self-defeating paradigms.  Each person that throws off the yokes of religious psychic domination without tossing the baby out with the bath water, that is, without thinking dualistically, either you accept a religious paradigm or declare yourself a non-believer in “god”, is helping to envision the brave new world we can dream into being, if we want it.

We don’t need to follow a religion; we are immortal.  It’s built in, like a heart, brain and lungs; we have a soul, spirit, self, psyche. There are moments in life, ecstatic or extreme, when the borders between the physical and the non-physical are naturally transparent and we have a direct experience of the divine.  Each time we fall asleep and dream, or meditate or trance, we have access to personal experience of what lies beyond this physical lifetime. We can answer our most important questions for ourselves; we don’t need to let ourselves be manipulated into believing we have to join a religious cult to ensure our safe passage.  On the contrary, it would be unwise to adopt any attitude that has us vibrating in fear, hate, righteous judgment or reactionary violence because in the thought responsive realities of the astral planes, we might perpetuate that environment for ourselves.

In my view, it’s paramount that more and more people make a viable organic spiritual connection for themselves and throw off the religious yokes on our psyche.  I dream that freedom of religion will transform to freedom from religion, so religious terrorism no longer exists.
As John Lennon says:

Imagine there are no countries
It isn't hard to do
Nothing to kill or die for
And no religion too
Imagine all the people
Living life in peace...

If we can imagine it and dream it consistently, we can make it so.  You may say I'm a dreamer; may I say you're one, too?

Posted by Adelita Chirino at 9:48 AM 3 comments: