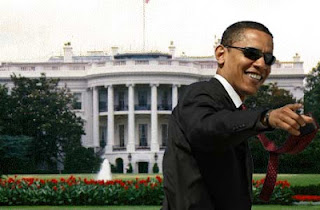 To quote Stevie Ray Vaughan in his song Tic Tock, "Last night while sleeping in my bed, I had a beautiful dream."

I'm at the White House, in some elegantly appointed office. I'm talking to a top aid about submitting my candidacy for president of the US. We're discussing the pros and cons; he's encouraging me to do it. I think, "why not?" and sign the index card which is my submission. Next thing I know, I won. I didn't run a campaign; I was just minding my own business at home (the one I live in now) and news comes that I am now President Elect of the US. I'm amazed and deeply aware of what a huge responsibility lays before me. I see my neighbor across the fence and ask her, "Do you believe I'm elected?" She looks at me openly and says, "You're nervous, huh?" Next I'm at a picnic, talking to President Obama. Now that he no longer has to be president, he's wearing a blue and white striped polo shirt and navy shorts; I call him by his first name and ask him many questions about his experience. He's supportive, warm and congenial and answers my questions honestly. I ask him what cabinet position he'd like because I want him on my team.
Maybe this is what I get for poking around in President Lincoln's dream.
http://litadreaming.blogspot.com/2012/02/what-if-lincoln-had-lived-in-dreaming.html
My teaching point from this dream is about the power of dream imagery to re-energize us on a soul level. I was feeling kinda blue, overwhelmed perhaps; waking up with this dream, I can't get the smile off my face. How a dream makes you feel when you wake up is a huge clue to it's message. For me, this is a soul level message: You're elected. You can do it. This is about my soul's purpose. No one explains this function of dreaming better than Robert Moss:

"One of the greatest gifts of dreaming is that it puts us in touch with soul. It takes us beyond the limited understanding of the everyday self and shows us who we are, what our soul’s purpose is in this life experience and what our heart truly yearns for. There is a word for this vital function of dreams in the language of the Huron, a dreaming people of North America. The word is ondinnonk, and it means a "secret wish of the soul", especially as revealed in dreams. This expression takes us to the heart of healing. By connecting with our dreams, and celebrating and acting on the information they gift to us, we bring the energy and magic of soul into our daily lives. As we allow our big dreams to take root in this world, we become whole and well, and start living our deeper story. As we help others to honor and celebrate their soul guidance, as revealed in dreams, we become healers and dreambringers."
(from Dreaming True).

Soul work in dreams doesn't have to manifest sanctimoniously. Humor is a favorite teaching tool of the dream source, something I truly appreciate. My experience working with other people's dreams suggests that it's not just me; dream humor is widespread. (I think divinity without humor is dangerous; following humorless divinity leads to a lot of unnecessary suffering, in my opinion.)

This dream tells me I'm up for the challenge my life is presenting; there are several layers of meaning I can explore in it. Psychologically, I can be president of us, me and all my moods and thoughts and experiences; my ego is strong enough to find the right balance. That's one way to look at it. Or, perhaps I will be asked to take a leadership role of great responsibility in the future. Definitely, it's a dream I'm going to re-enter soon and continue my discussions, especially with Barack. This little dream is a gold mine.

I'm grateful for this kind of support and guidance from my dream life and I offer it as just one wee example of the power of an on-going dream dialogue and practice.

As for me; I'm humming a new tune today: 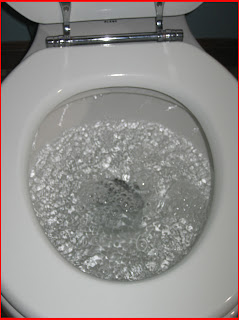 In my waking dream, a little bald man, something like the Wizard of Oz, has the microphone and is broadcasting the most insane bullshit about a Georgetown University law student, Susan Fluke, who testified before congress about the importance of insurance assistance for obtaining safe birth control for a college/graduate school woman student. This man behind the curtain suggested that this student should have to submit sex tapes of herself so that taxpayers like himself can watch and get something out of the exchange.

Knowing how to handle icky dreams:

First, I throw up, preferably on his shoes, because it’s such a visceral shock to my system that a media figure with his outreach should advocate this criminal intent toward a young woman; (remember, our nation is currently watching the results of such an awful invasion of privacy, something that was intended as a joke, in the Rutgers students’ trial).

Second, I ask, what will women say about this stupid ass comment? Will they say, "Enough! Who are you to legislate my sexuality?" While Viagra and Cialis are constantly promoted, religious farts are arguing about my right to use birth control, let alone have a safe and legal abortion? Who died and left them in charge? What century is this?

In my waking dream, women don’t allow such idiocy, such harmful idiocy, to go unaddressed. Like the backlash incurred when the Komen Foundation cut financial support of Planned Parenthood, there’s a tidal wave of response from women and men who value mutual respect, partnership and equal rights for women. Everyone is saying; “Enough. I will not support a party politically who calls this entertainment nor will I endorse this entertainer. His slander affects not only Ms. Fluke, but also my daughter, my niece, my friend’s daughters.

Ms.Fluke is an accomplished law student willing to make an intelligent public statement on this important issue, the right of any woman to have safe, affordable access to birth control. I can’t believe this is still an issue! Limbaugh's base approach to this young woman, to this issue and to his women listeners is so unacceptable to the majority of Americans, in my waking dream, that he loses his show and has to move to Afghanistan and join the Taliban where he once again can feel appreciated for his views on women.

Measured against this young woman’s commitment, vision and intelligence, Rush Limbaugh sounds like a seismic jerk. He obviously owes her an apology, but he also owes every woman an apology. I hope he doesn’t have daughters, or is he the kind of patriarchal guy Lot was when he said to the angry mob outside his house, “No don’t harm these male guests; harm my daughters instead”.

In my dream, American women and American men get up and say to the presumptuous males who hold a hearing on contraception and do not allow Fluke or any other woman’s input, “Here’s your pink slip”.

In my dream, every time I and every other woman or girl using toilets flush, we say: Flush, Rush. Now I don’t mean him personally; I mean what he represents: The old back room boy, the in-with-the-big-boy boys, and the patriarchal women haters. I flush that ideology. I reject that behavior. And I am speaking out against it.

Pretty soon, we can get rid of crap like this. I suppose we just need to give a shit.

The best lack all conviction, while the worst
Are full of passionate intensity.

It doesn’t have to be like this, that’s my waking dream.
Posted by Adelita Chirino at 1:33 PM 3 comments: