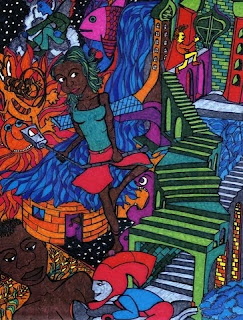 In my dream last night, I watched a scene from a movie; that’s how it felt.

A woman lies in her bed. She’s wearing panties and a tank top and has a lovely, young lithe body. Her straight, shoulder length light brown hair floats around her on the pillow as she lingers in that dreamy in between of sleep and waking. It’s a double bed, from the look of the covers, she didn’t spend the night alone.

Into the room walks a man, obviously older than her by at least ten years, her lover. He’s dressed in a red flannel shirt and jeans. He’s not a handsome man, really rather ordinary looking with thinning blonde hair and workman’s features. He’s telling her that he’s leaving, for good. It obviously comes as a painful surprise to her. She does a languid backward somersault off the side of the bed, which is near a wall, and stands to face him.

It’s as if that incongruous physical gesture allows her to register her emotions. She stands, back against the wall and speaks her truth to him. I don’t remember the dialogue in detail, just the tone of it. She’s recounting their brief affair and what it meant to her. She’s describing him, his behavior, lamenting his inability to grasp the depth of emotion she opened to him. At one point I’m amused to hear her say sadly, but without bitterness or irony; “the truth is, you’re not that smart.”

Then another man is in the room; he’s a friend of the other one, stockier, white haired and definitely hostile. I got the impression he’s the impetus for her lover’s departure. He is physically aggressive towards the woman and lunges towards her, as if to attack her. I think she’s either going to kung fu his ass or get hurt herself. Instead, she embraces him, pinning his arms to his side, and unleashes her grief in a torrent of wails and tears. The man is helpless in her arms.

I wake up. The feelings that lingered for me were wonder and satisfaction. I witnessed the power of true emotion expressed. I honor the power of women to channel emotion and perhaps to open that door for men. I also take home the beauty of speaking my truth, however emotionally messy it might be.

My training in psychotherapy leads me to ask what does this dream mean about me and my emotional life and my relationships to the men in it? But recently I’ve been reading a fascinating book by Jurgen Ziewe, Multidimensional Man, in which the author relates his many journeys out of body, (OBEs) into other dimensional worlds. He believes these very dimensions are the places we’ll all travel to after physical death. Here’s a thought provoking quote from his book regarding ordinary dreams:

“I was talking to people in my dream, becoming fully awake and aware while maintaining my conversation…I was distracted only briefly from our conversation by the realization that many dreams are probably as real as waking life, except for our lack of awareness. I wondered how many dreams were real.” Pg. 173

Robert Moss frequently states that a dream is a place, one that the dream self, free of the physical restraints of our three dimensional world, explores and experiences, just as the waking self explores and experiences events in daytime life. A psychological interpretation of dreams is what our Western, rational oriented world accepts as the most plausible. As Robert recently reminded me, it’s not the approach favored by ancient and indigenous cultures, nor is it his.

I was there in this dream place, watching the events unfold but not interacting with the characters directly. Are these Shadow and Animus figures acting our a drama for the benefit of my psychological growth; or are these other dimensional people, living out their own dramas, flickering on my dream screen for this one scene? Do they know I saw them? Was I meant to watch, to learn?

Since the beginning of this month, I’ve been absorbed in renewed studies of OBE, lucid dreaming and ordinary dreaming experiences, my own and those of authors I’m reading. I’ve attempted many times to post something meaningful about exploring these dream dimensions and have been daunted by the mind-boggling quality of this subject. This morning, this simple dream experience featuring this brave and honest woman tipped the scales for me. I offer it in its simplicity as the beginning of a conversation I’m eager to entertain, on this dimension and on many others.

What is a dream? A dream is a place.

(FYI: http://www.multidimensionalman.com/Multidimensional-Man/Astral_Travel_and_life_after_death.html)
Posted by Adelita Chirino at 9:30 AM 3 comments: