The Shadow We're Up Against 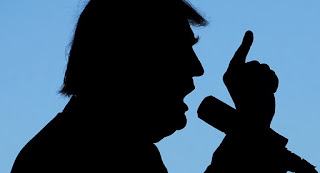 Recently, I read a wonderful post by Jungian scholar and author, Paul Levi, who, as I've mentioned, has written some fascinating and wise work on the Shadow archetype.  In this article, I hear the author adulate CG for his genius and way ahead of his time ways. He thinks of Jung as a teacher, and so do I.

I'm good with crediting Jung to a point.  As ahead of his time in scientific imagination as he was, he was also a man of his very patriarchal world view.  Ask Emma if living with C.G. was a picnic, or Toni.  I'm enjoying getting to know my favorite dead dream teacher as a person in Deidre Bair's biography of the great doctor.  But I already knew he was steeped in male superiority from some of his writings on the anima/animus archetype.  I remember practically throwing my copy of Symbols across the room when I read how sometimes rough treatment is the only thing an "animus possessed" woman can understand. Synchronistically, I was working as a counselor in the field of domestic violence, counseling recipients of  male superiority at its most toxic. Jung was enlightened perhaps, compared to contemporary patriarchal standards, but he held and benefited from many prejudices of his status in a patriarchal, "it's a white man's world."  He assumed knowledge of the Feminine Archetype, without understanding the impact of 6 millennia of vilification obscuring the long ancient  history of the Great Goddess.  Fortunately, one of his students, Erich Neumann steered a better psychic course when he published "The Great Mother" in 1955.

Levi makes some good points about our contemporary psychic jeopardy,  (points I also made at the start of the recent gruesome Presidential campaign). At the moment, metaphorically and literally, the Feminine Archetype is living in a "pussy grabbing" world.  From the upright Christians who want to restrict a woman's authority over her life and her body  to the Muslims, who go the extra mile and put women in sacks, to the secular patriarchal club that runs the world and wants women in bunny suits for entertainment,  women are facing new barriers to leadership and power.  Ironically, women are more powerful now than they've been in 6,000 years, in consciousness and in numbers.  More men are actively supporting women's progress than ever in that time, as well.  It's time for the obscene imbalance at the heart of patriarchal religion, the maleness of god, to get tossed out of our collective consciousness.

The Shadow we're up against is Patriarchy; - Trump, Putin, N Korea, regimes of oppression, exclusion and complete control.  Just take a look at the leadership; what do all these sinking ships have in common? Patriarchal despots leading the old boys' brigades around the world.  The mentality of patriarchy is subjugation, domination, exploitation, near sighted, self-serving religion.  The mentality of the Feminine Divine is that we are all one on this planet; what affects one, will affect the other.  What goes around, comes around.


Posted by Adelita Chirino at 6:47 PM