On the Cover of the Rolling Stone 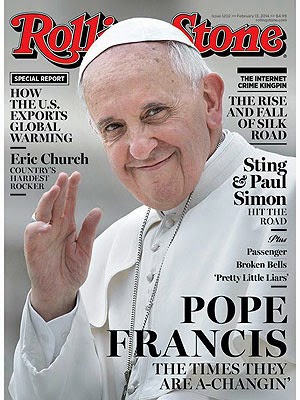 In a "USA Today" story recently, a woman reporter relates the Pope's opinion on women priests, which is No. She concludes:
"Women priests may not top his list, but perhaps Francis is serving women through his focus on global poverty and hunger. Is that enough?" Uh, no; it's not enough.
Theology professor Alice L. Laffey makes a similar point in her op-ed, saying: "Throughout the world, women and their children make up the greatest percentage of human beings living in destitution. Their main concern is not women priests but food, health, education and physical safety. Francis' genuine concern for the real lives of the poor and suffering warmly embraces women."

In other words, Francis is serving women through his focus on global poverty and hunger, because for some obscure reason, the majority of the world's poor are women and children.  So look how much he likes women; he's going to talk more about what they need and maybe see if he can get them some management positions in the Vatican, (although most Vatican positions of authority require high ranking clerical ordination).

Here's my take on Francis' position: The majority of the world's poor are women because women have no status in patriarchal government, in patriarchal religion nor as the Divine Archetype.  Patriarchy is an old fashioned word for men rule, make all the decisions concerning women and children and God looks like one of them, an old white guy.  In patriarchal paradigms, woman's power is stripped from her; consider that it's been less than 100 years since American women got the right to vote  If you wonder what it took to get the 19th Amendment passed, watch Hillary Swank's portrayal of Suffragist leader, Alice Paul in "Iron Jawed Angels."  You may have to close your eyes during the part where jailers force feed the prisoners on a hunger strike; it's gruesome.  But that's what our grandmothers had to do to get us the vote in this great country.  Now when do you think women in some Muslim nations, or in Orthodox Hebrew communities or in the Catholic Church will get equal rights? By the way, American women are not guaranteed equal rights under our constitution, as we somehow couldn't manage to pass the ERA.

Women are poor because women are on a sliding scale of denigration in patriarchal cults around the world, so don't tell me that the head of one of the big 3 global patriarchal cults is doing enough for women by talking about how they are poor and need help.  By the way, I think he talks in general, about poor people, not poor women, but we all know how inclusive patriarchal language can be.

So then comes an interview in the Wall Street Journal yesterday, Ash Wednesday, (the infamous time of penitence for Catholics that kicks off, wisely enough with Mardi Gras) with the Jesuit editor of the Catholic magazine, "America", James Martin.  Headline: "Women Could Have Greater Role in Church, Pope says." (Sorry, it's a little hard to watch with a straight face because he has a big black cross smudged in ashes on his bald pate.)

Gee whiz, I wonder what Pope Francis has in mind for our new roles in the church?  Ordination?  Making Pope Joan known to the world or apologizing and asking the church to do penance for the millions of victims. the majority women, of the bloody Medieval and Renaissance Roman Catholic Inquisition? Gee, what could the Pope have in mind, because he already said ordination is off the table because he doesn't want to see women "clericalized," huh?  Now that's sweet; he doesn't want to see us bothered with those long black robes and stiff white collars, but maybe we can run the Vatican equivalent of the PTA or go help the poor like Mother Teresa.  Besides, he says, we've talked about ordaining women in the Church before and decided against it; there's no need to revisit this pesky little subject.

Now, according to Father Martin, the Church has already said no because...(No, not because we don't have a penis like Jesus did, that wasn't the reason he gave), because if Jesus had wanted women to be priests, he would have started off picking one as an Apostle, which he didn't; so there, women can't be priests now.

OMG!  Did he just say that?  Despite the volumes of scholarly exegesis on John 20:11-21, in which Jesus appears first to Mary of Magdala on the third day after he's crucified? She doesn't recognize him  (most departed appear looking terrific and I'm sure that's not what she was expecting), until he says her name, and she knew him.  (Did they embrace?) "Don't cling to me" he says,  "because I have not yet ascended to the Father. But go and find the brothers and tell them: I am ascending to my Father and your Father, to my god and your god."  Jerusalem Bible

You see, the word "apostle" is derived from the Greek, "apostolos"; John wrote in Greek. It means messenger  or ambassador.  Now whom did the Lord choose as his first "messenger"?  To whom did He first appear, though Peter and the Beloved Apostle were duly fetched by Mary when she found the tomb empty.  Yeah, they searched around, found the linens and went running back to establish a religion based on artifacts.  Mary stuck around and was rewarded with the real thing; she was first to see the Risen Christ and the first to "take the message to the brethren, "Jesus is Alive.  He is Risen;" Mary of Magdala was first to proclaim this message.  The first Apostle to the Apostles was a woman, selected as his ambassador by Jesus himself.  She was also made a disciple by Jesus, (Luke 10: 38-42; since I know the good Father Martin might argue that one can't be an Apostle without first having been a disciple) the day she and her sister Martha were supposed to serve the food for the hungry dozen, but Mary was sitting there at Jesus' feet listening to Jesus teach.  Martha complained, but Jesus replied, "Mary has chosen what is better and it won't be taken away from her."  Did I mention that the word disciple is derived from the Greek word that means "to sit at the feet of a teacher" and that it was a crime punishable by death to defile the Torah (the holy Hebrew laws Jesus was purportedly teaching) by teaching it to a woman?

Jesus was a Feminist; his treatment of women with respect and compassion probably contributed greatly to his condemnation by the religious authorities of his day. If he was running the RC today, we wouldn't be having this conversation, but he probably never intended the institutions that came after his death; he taught that "the kingdom of God is within you."  What's more, according to many ancient but non-canonical (meaning the RC won't credit their authenticity) texts, women had lots of authority in the early Church. Just one century into the "Christian Era, not so much.  How did that happen; ask Paul, a great proponent of keeping women silent and veiled.

There are lots of skewed reasons for not ordaining women, beginning with the mythical fact that women are guilty from the get go; if it wasn't for Eve, we'd all still be living in paradise.   In reality, women threaten the very bedrock of the patriarchal RC church, that God is Male.  When I was a divinity graduate student and a candidate for priesthood in the RC through the "Women's Ordination Movement" of the 70's and early 80's, our motto was "New Women, New Church."  We weren't going to lie; you have sexist repressive dogma and we're here to take ink to that parchment and make some alterations.  For one, we will call God "Mother" as well as "Father" in recognition of the great historical and ancient Goddess traditions that were all but silenced by patriarchal brutality; we will bring back the full Divinity of the Feminine Archetype and represent that archetype in our priesthood.

Okay, so it's no surprise we didn't get ordained; we were and are an open threat to the misogyny that has reigned too long.

I can understand the Pope-u-larity of this pontiff; he's definitely a relief after the tight ass party line toters we've had recently, but he's got to walk the walk, not talk it.  Religious theater like foot and baby kissing doesn't do it; neither does unexpected papal humility, charm or ordering your own pizza. Francis says he can't change what Pope John Paul II (J2P2) said on the subject of Women's Ordination, despite that he's been contradicting that particular predecessor on other matters, like Gay inclusivity and letting divorced Catholics take communion.

"For now, though" the news reports, "Catholics have to settle for slow, subtle shifts, which, to give Francis credit, are already occurring."

Really?  Why do women and men who support women's ordination have to settle for anything?  It's crucial I think to speak out now; there is no reason not to ordain women and every reason, including historical precedent to ordain them.  If Pope Francis wants to earn his picture on the cover of the Rolling Stone ("the thrill that will getcha when you get your picture on the cover of the Rolling Stone." playing in the Vatican?), he needs to act to bring real balance not just to the Roman Catholic Church, but to the Modern Collective Psyche that cannot function, as Carl Jung warned, in such a state of disequilibrium without creating the collective psychosis we are clearly experiencing today.  Raise women to equal status with men, physically by ordaining them and psychically, by restoring the Divine Feminine.  If there was ever a Pope who could accomplish this, outside of John XXIII, it's Francis; I hope he wants to.  Let's all focus on sending him the message: "Ordain Women, Hail Mary, Save Humanity"

Posted by Adelita Chirino at 9:04 AM