What if Lincoln Had Lived in a Dreaming Society? 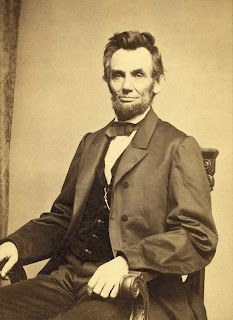 Coming up, just after Valentine's, is President Lincoln's Bday. One of my favorite dream stories from history is that Lincoln had a precognitive dream about his assassination ten days before he was assasinated. Here's the account told by his friend and bodyguard, Ward Hill Lamon. (taken from Lehrman Institute website)

"In the last month of his life, Mr. Lincoln had several strange dreams, one of which he related to his wife and Ward Hill Lamon shortly before he was assassinated: "About ten days ago I retired very late. I had been up waiting for important dispatches from the front. I could not have been long in bed when I fell into a slumber, for I was weary. I soon began to dream. There seemed to be a death-like stillness about me. Then I heard subdued sobs, as if a number of people were weeping. I thought I left my bed and wandered downstairs. There the silence was broken by the same pitiful sobbing, but the mourners were invisible. I went from room to room; no living person was in sight, but the same mournful sounds of distress met me as I passed along. It was light in all the rooms; every object was familiar to me; but where were all the people who were grieving as if their hearts would break? I was puzzled and alarmed. What could be the meaning of all this? Determined to find the cause of a state of things so mysterious and so shocking, I kept on until I arrived at the East Room, which I entered. There I met with a sickening surprise. Before me was a catafalque, on which rested a corpse wrapped in funeral vestments. Around it were stationed soldiers who were acting as guards; and there was a throng of people, some gazing mournfully upon the corpse, whose face was covered, others weeping pitifully, 'Who is dead in the White House?' I demanded of one of the soldiers. 'The President,' was his answer; 'he was killed by an assassin!' Then came a loud burst of grief from the crowd. I slept no more that night; and although it was only a dream, I have been strangely annoyed by it ever since." " Mrs. Lincoln was shocked by the story: "That is horrid! I wish you had not told it."

I ask myself, "What if Lincoln had lived in a dreaming society? What if I am president and this is my dream?"

I wake up in a sweat and say, "Holy Shit. This is serious." I calm down, take slow, deep in the belly breaths, I tell myself to calm, focus. I thank the dream source for this warning. When I feel ready, I re-enter the dream in a conscious, twilight state so I can ask some questions. I see myself before the catafalque facing the soldier who just gave me the news. I say, I am your president, tell me everything that has happened here. I engage that character until I've gotten all I can, then I turn to myself in the coffin and say, "Abe, what happened, tell me everything." After that, I raise the alarm; get all the guards organized and put everyone on the alert that an attack on the president's life is imminent"

Now, I'm ready to take action in waking life. I rouse Mary and summon Ward. Sitting at the table with tea, I share my dream with my dear, clairvoyant wife and my trusted friend. I see fear in Mary's eyes turn to resolve. She'll dream on this, too, she tells me, and consult her dream group now. Ward has summoned all the Captains of the Guard for an emergency briefing.

Indeed, the alert works. Instead of low security at the theater, the security is covert and intense. JWB is recognized as an intruder, arrested for drunken vagrancy, and kept a few days in the tank. After his hangover wears off, that moment in time is over, he gives up his lunatic ways and goes home.

This is my dream of President Lincoln's dream.

If only he hadn't said, it's only a dream. If only Mary had recognized the jolt of power in that dream instead of cringing before a possible nasty patch. If only Ward had said, so reality check, Abe. What feels most real to you about this dream? What did you find out when you went in? You've got my word I'll put together the guard, see that they all hear the dream and are on the alert. This dream's a gift, Abe.

If only Abe had lived in a dream sophisticated society. I can't help but wonder.
Posted by Adelita Chirino at 5:23 AM