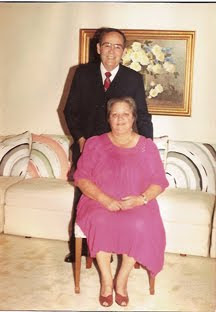 One of the strongest blessings of dreaming is the portal it opens to communication with your beloved dead. My dad died of a heart attack at the age of 66 in 1989, my mother died of deteriorating maladies some ten years after. Very different people, but they were good parents and did their best.

Me and my dad were very close in nature, in sense of humor. I hold him in high esteem, as does my brother. My mom posed a few more challenges in that we didn't always get along, but when they each crossed, I posted myself at the dreamgate to wait for their contacts.

I was not disappointed. I often tell people who are grieving and looking for a dream visit not to put a time frame on the vigil. Time isn't the same in other dimensions, dreams make that clear. For some people, the experience of dream contact is instantaneous with the death; the loved one shows up immediately to say goodbye. Other times, the first visit takes weeks, months or even years. Patience and watchfulness is required. Over the years I've had many visits. I'll relate two here to illustrate for you how pure the dream paths are, how holy.

My mom was not happy at the end of her life; she had her reasons and many were just living in physical debility and pain. It sucks. I wanted to know, more than anything, "Are you alright now mom?" so that's what I asked every night, hoping she could get a message through to me soon. It took several months, but finally I dream:

I look out the back door (of the actual house I was living in waking life at the time) into the yard and see my mother. She looks like she did in her 50s perhaps, before her health deteriorated, and she's with several other people, none of whom I know. They're telling her jokes and she's laughing her rich, belly laugh which I used to adore, but which grew increasingly rare in late years. I feel so happy to see her like that; I know she's okay. I wake up.

Dreams of my father, mother, or both aren't always dream visits. I've come to recognize a pattern to my true visitation dreams from many I've had of my father and mother, and others.

The setting mirrors my setting in waking life; it's my current waking reality. The same is true for me of lucid dreams, so I see a connection between "visit" dreams and lucid dreams.

My departed never come alone, at least one "angel" in the form of some stranger is involved; I've never met any of them before in waking. In my mother's case she was accompanied by a whole group. My dad usually has just one companion who often stays behind and gives me another helpful message. Also, my dad's, (man or woman, it varies), usually let's him know when they have to go, time's up.

Usually there's a message given very clearly. For me, it's meant hope, support, reconciliation, healing and encouragement, not to mention a few good laughs.

There's often an element of surprise and delight. To hear my mom's unabashed, wholehearted laughter, what a healing image, a group of new friends making her laugh!

Again the setting matches my waking; I'm visiting a familiar holistic health practitioner's building, but it has turned into a campaign center for Obama (though I know he's already president). I go in to see him, and he's sitting behind a dutch door. I say something to him and he turns to me and says, "I love you."

It wasn't until I wrote the whole dream down that I realized with a slap to the forehead, it's my dad! It's my dad telling me what I need so much to hear right now.

How did I know? For one, it's a joke in my family how in some pictures when he was young, my dad looks very much like a lighter Obama. Also, in a previous visit dream of many years ago, dad turned up behind a dutch door. A recurring image like that often triggers recognition for me.

The "I love you" made me feel absolutely wonderful. It was so unexpected out of the mouth of our current president, that it gave my dreaming and waking self that thrill of recognition that says, this is important, out of the ordinary.


Robert Moss speaks frequently of the need to culture a modern art of dying using the art of dreaming; he wrote his book, "Dreamer's Book of the Dead", in the hopes of doing just that. I've heard so many wonderful stories of dream gifts from the departed told to me by different friends and family that I know this channel is commonplace. You don't have to be a medium and you don't need third party intervention, you simply ask your dream source for an opportunity, and the knock at the dream door comes. (I smile to remember how my father literally showed up in my nephew's dream as a knock on the door he knew to be "Abuelo knocking.")


I've posted previously on this topic; if you're interested the posts are:
"Healing the Hurt" on Thursday, March 4, 2010 and "Anniversaries" on February 21st, 2010.

I'd love to hear about your experiences.
Posted by Adelita Chirino at 6:45 PM

Labels: Communicating with our departed